CUPERTINO, California—February 19, 2008—Apple® today announced that its iPod® shuffle, the world’s most wearable music player, is now even more affordably priced at $49 and that it is introducing a new 2GB model of the iPod shuffle for $69. The popular iPod shuffle is just half a cubic inch in volume, weighs just half an ounce, features an aluminum design with a built-in clip and comes in five colors—silver, blue, green, purple and a (PRODUCT) RED special edition.

The iPod is the world’s most popular family of digital music players with over 140 million sold. The lineup includes iPod shuffle, the world’s most wearable iPod; iPod classic holding up to 40,000 songs*; the incredible iPod nano with video playback and the breakthrough iPod touch with a revolutionary Multi-Touch™ user interface. iPod owners can choose from a vast ecosystem of accessories with over 4,000 products made specifically for the iPod including cases, fitness accessories, speaker systems and iPod connectivity in over 75 percent of US automobiles.

*Music capacity is based on four minutes per song and 128-Kbps AAC encoding.

Apple ignited the personal computer revolution in the 1970s with the Apple II and reinvented the personal computer in the 1980s with the Macintosh. Today, Apple continues to lead the industry in innovation with its award-winning computers, OS X operating system and iLife and professional applications. Apple is also spearheading the digital media revolution with its iPod portable music and video players and iTunes online store, and has entered the mobile phone market with its revolutionary iPhone. 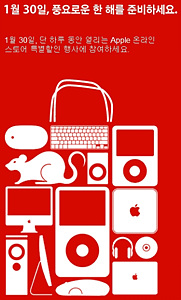